Midland National is a leading provider of annuities and life insurance

Today, Midland National is one of the leading insurance companies in the U.S. Our proud history dates back more than 100 years when we were founded in 1906 under the name Dakota Mutual Life Insurance Company. The company grew steadily during the early years, even as it faced the economic challenges of World War I, the Great Depression, and World War II.

In 2006, Midland National celebrated its 100th year of providing quality service, financial strength, and life insurance and annuity products that are proven performers.

With our continued emphasis on providing quality products and excellent service, Midland National looks forward to celebrating many more milestones in the years to come. Explore our timeline below. 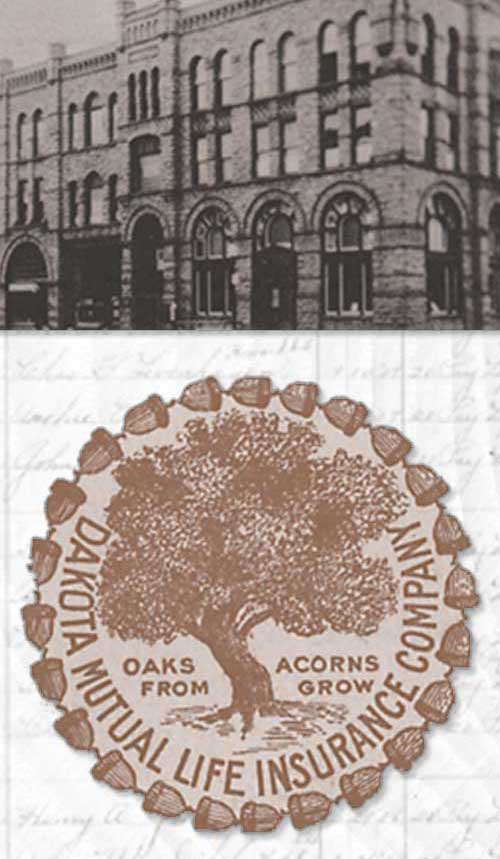 1906
The company that would eventually evolve into Midland National Life Insurance Company was born on a late summer evening in 1906, in the Black Hills of South Dakota.

In 1906, the Dakota Mutual Life Insurance Company was founded in Lead, South Dakota, and later relocated to the city of Watertown.

Symbolizing the philosophy of its founders, the company’s slogan “Great Oaks from Little Acorns Grow” was used in the company seal.

When the first death claim came early in 1908, it was necessary for company leaders to borrow the funds needed to pay the claim.

The insured died of appendicitis at the age of 38. Compared to today, risk of death was higher in the early 1900's. Many people died from a variety of infections and illnesses that seem minor or unknown today.

1918 - 1919
The Spanish Flu outbreak swept across the United States, dramatically increasing claims for the company. It was the worst epidemic to strike the world during the 20th century, claiming more lives than World War I. During this time, two thirds of Dakota Life’s claims were attributed to influenza and pneumonia. 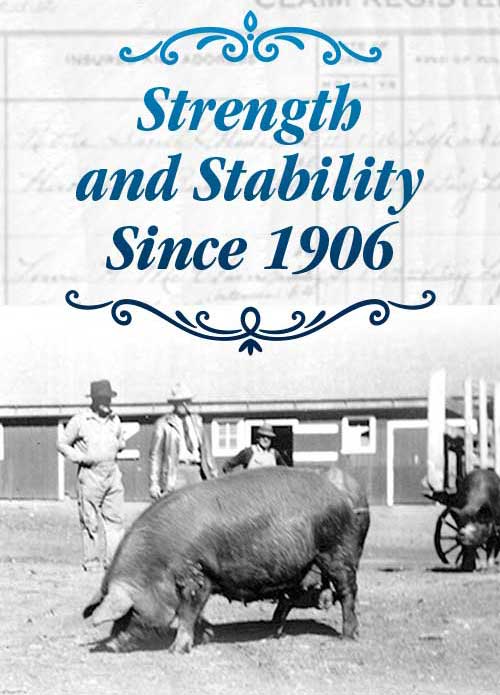 1925
In 1925, the stockholders voted unanimously to change the name to Midland National Life Insurance Company. The new name reflected the company's efforts of expanding nationally.

1930s
Perhaps nothing illustrates Midland National’s ability to innovate better than the steps the company took during the major economic depression of the 1930s. The company furnished pigs on loan to farmers, on the condition that each farmer renew or take out a life insurance policy. When the pigs were bred and sold, the farmer repaid the loan and began paying premiums. The agreement signed was called a "Hog Contract." This plan did more than make it possible for farmers to buy insurance - it helped rehabilitate a depleted swine industry in South Dakota, Minnesota, and Iowa. At one time, the company had $90,000 invested in pigs. That would be equivalent to over $1 million in today’s dollars.

1934
The Depression and Dust Bowl of 1933 and 1934 plummeted the nation into a financial crisis. Not surprisingly, insurance sales showed a dramatic decline. Midland National, however, weathered the adverse conditions and remained optimistic about the future: "…Old 1933 with its depression, its 'hard times,' its sorrows and its tragedies, is now gone forever. In its stead we have a brand new year…" (Acorns, January 1934, E.E. Kneedy, sales manager) 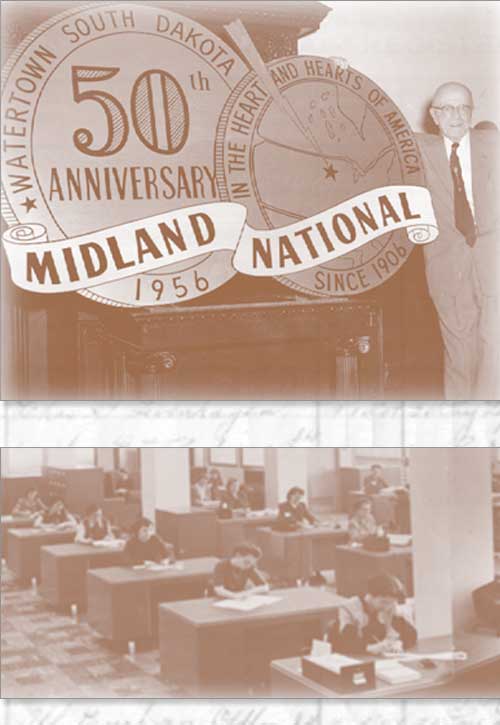 1947
Frank L. Bramble was named President. Bramble, a native of South Dakota, was one of the founders of the company and remained a part of Midland National until his death in 1966 at age 94. His dedication and steadying influence contributed greatly to the success of the company.

1951
The ground breaking ceremony for a new home office in Watertown, South Dakota, was held on August 9, 1949, and the building was dedicated on January 11, 1951. The building still stands in Watertown and is known as “Midland Plaza."

1958
In 1958, Reserve Life Insurance Company, based in Dallas, Texas, acquired the majority of Midland National stock. Charles A. Sammons, sole shareholder and president of Reserve Life, owned eight other life insurance companies and had been active in the business for 30 years. In addition to health and life insurance companies, Sammons acquired control or substantial stock interests in diverse industries. These businesses included hotels, travel related companies, equipment, industrial and energy distribution, cable television, bottled water, real estate and manufacturing. Sammons had admired the rapid growth of Midland National, which had doubled its life insurance in force during the prior five years.

1961
Midland National embraced the Personal Producing General Agent (PPGA) system as the marketing structure to distribute its products to consumers. Today, Midland National is licensed to operate in 49 states, Puerto Rico, the Virgin Islands, Guam and military installations both overseas and at home.

In 1961, William A. Rigsbee was named president of Midland National. For the next 31 years, Rigsbee, as president and chief executive officer, set Midland National on a course of unparalleled growth, stability, and financial strength.

Under his leadership, the company increased life insurance policies in force from $275 million to $50 billion; increased assets from $29 million to $4.1 billion; and achieved a compound annual growth rate of 15 percent while maintaining superior industry ratings and a high quality investment portfolio.*

1977
Midland National relocated from Watertown to Sioux Falls, South Dakota. The relocation offered several advantages, including a larger population from which to hire personnel for the growing company, better air travel connections, and access to a larger postal processing center.

1978
In 1978, Charles Sammons established an Employee Stock Ownership Plan (ESOP). The Sammons ESOP was designed to provide more than a retirement benefit. It enabled employees to impact the value of their personal holdings as a result of their contributions to the success of their individual companies.

1979
Midland National occupied its new 89,000 square-foot gold-glass home office building in June 1979. The move to a new home office in Sioux Falls would mark the beginning of a new era in Midland National's history – a period of unprecedented growth. Wayne A. Gillis joined Midland National in 1962 as associate actuary, advancing to senior vice president in 1975. In 1981, Gillis was named president. Gillis died November of 1983 and Rigsbee returned as president. 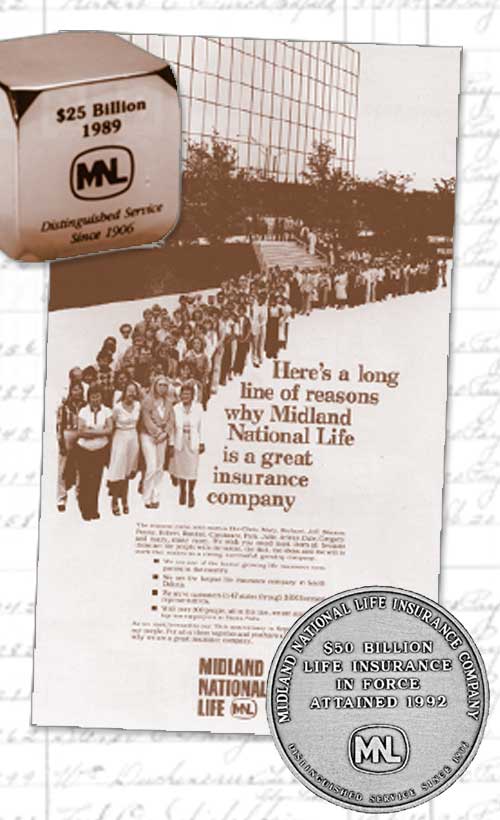 Sammons Financial Holdings, Inc. was established and Midland National’s president, Jack Watson, served as the first chairman and CEO of the company.

1999
Sammons Annuity Group was born in West Des Moines, Iowa. Focusing on product development, marketing, licensing and contracting, new business and policy administration of fixed annuities, a team of seven employees got the upstart off the ground. Among them was Esfand Dinshaw, then vice president of operations, who would one day become Sammons Financial Group’s chairman and CEO.

2001
From 1997-2001, Midland National grew in both size and complexity through its own efforts and those of its parent company, Sammons Enterprises, Inc., with combined assets reaching $9.2 billion.* And in just its third year of existence, annual annuity premium for Sammons Annuity Group eclipsed the $1 billion mark.

2004
Midland National exceeded $100 billion of in force life insurance. At the same time, the annuity business was booming, with the staff growing to 200 employees in just five years.

2006
Midland National celebrated its 100th anniversary, launching a radio and print campaign, titled, "Sioux Falls at its Best." Midland National recognized its achievements in the community over the past century.

2009
After 30 years in its downtown location, Midland National's administrative office moved into a new environmentally friendly SFG building in February, 2009, providing space for over 500 employees with room for further expansion.

2011
After a successful career with Sammons Enterprises, Inc., Mike Masterson retired from his position of chairman of SFG.

Sammons Retirement Solutions was also created under the leadership of President Bill Lowe, specializing in developing and distributing individual retirement solutions through banks and broker/dealers.

2012
Esfand Dinshaw was named chairman of SFG, also maintaining his position as CEO of the company.

2016
Having doubled to over 400 employees, Sammons Annuity Group celebrated a record year with over $6 billion in new business.2 In 2016, the entities forming SFG reported over $73.3 billion in assets and over $266.9 billion of in force life insurance.3

Talk with your financial professional today to see what Midland National life insurance product is right for you.

Talk with your financial professional today.

Don’t have a financial professional?

We can connect you.

Sammons Annuity Group is not an insurance company, insurance agency, or any other type of legal entity; rather it is an informal name used to describe collectively the personnel that design, market, sell and administer fixed annuity products issued by Midland National Life Insurance Company and North American Company for Life and Health Insurance.